Statistics for the weekend of 30/31 January 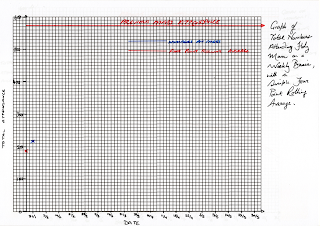 The Mass figures for the weekend January 30/31

The figure in brackets the lower end of how many 'units' can attend. A unit can be one single person, or a whole family/household/bubble - or even those who have travelled together in the same car. So the figure in the brackets can increase. So in Shepton it may be only that 40 single people attend, but if they are in bubbles/families/households/cars, then the number can be much larger.
NOTE: some Mass times have changed.

Our numbers this weekend were up 57 on the weekend before over the four parishes.
Since "Lockdown 2" the numbers have been 161, 189, 176, 201, 252, 259, 237, 244.
218 people came to Mass in total this weekend. Our Mass figures would normally have been 573. We are running at 38%.
*******
Four point rolling average 186.
*******
Data based on four point simple rolling average:
*******
[For those interested in statistical analysis, I have started using a four point simple rolling average. This should iron out statistical inconsistencies and give a clearer view of the trends within the four parishes as a whole. If for whatever reason the numbers are inflated or deflated for one weekend, four point rolling averages help to level out these outliers.]
Posted by Fr Bede Rowe at 3:02 pm