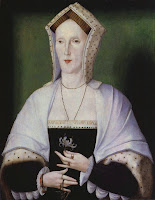 Today in the Diocese of Clifton we sing the Mass of the Blessed Margaret Pole, Countess of Salisbury, cruelly murdered for her faith by Henry VIII. She is the mother of Cardinal Reginald Pole, though her exalted status is because of her own actions, not his.

There is a good Wiki account of her life here.

This was found scratched on her cell wall:

For traitors on the block should die;
I am no traitor, no, not I!
My faithfulness stands fast and so,
Towards the block I shall not go!
Nor make one step, as you shall see;
Christ in Thy Mercy, save Thou me!


May she pray for us all.

There are lots of photos of the Chartres Pilgrimage on their website here. And tracking back you can see and hear Cardinal Sarah's homily.

For some reason I did not take any photos. I have no idea why. There seems to be a suspension of the reasoning faculties during this pilgrimage. But no matter.

And there are none of the Chavagnes Scouts either, as, for some reason completely beyond me, they did not carry their banner, but rather walked under the Maltese flag. I had a wonderful conversation with a chap in blue (and therefore very important) that we were the chapter of the Venerable Louis Marie Baudouin, from the Vendee, walking with Normandy, with the English, as we were a school, under the flag of Malta.

Now that Ireland has voted to kill its own children, the eye of evil turns its gaze to Northern Ireland. Here.

How desperately sad it is to see any country turn against its weakest and most vulnerable members, and then sing and dance in the streets.

It reminds me of the Canaanite God Moloch. 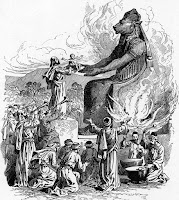 We have been killing babies for ages of course, but then the UK is such a civilised place to be. Perhaps Orwell forgot to include the mantra "Progress is abortion, abortion is progress". Why exactly should I be bothered when a refugee is killed? After all the aid agencies would have preferred that she had never existed in the first place - "they have too many babies these developing countries, they cannot look after them, we must teach them about abortion, and then they will be saved. Oh, and we'll not help them if they don't accept contraception and abortion." Nice.

And for anyone out there who still thinks that Amnesty International is a good thing... here. They should take that barbed wire from around that candle and wrap it around the neck of the infant in the womb.

What will be next? I grow weary.

Its that time of the year again when all priests and people of a certain sort congregate in Paris for the great pilgrimage.

So all there is to do is bind up feet and hope for the best! 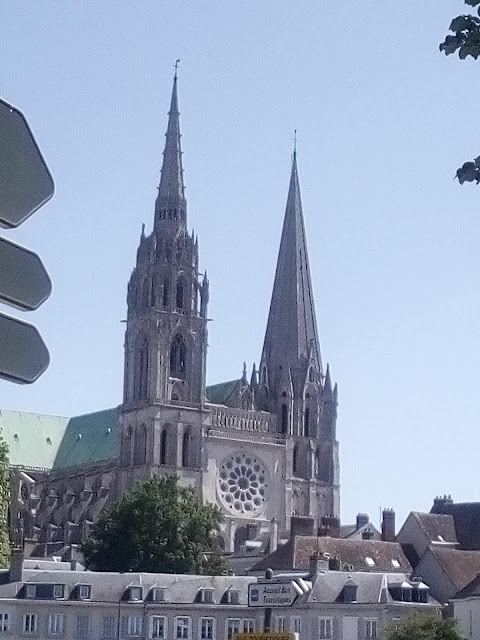 There is a great deal of concern these days over cultural appropriation. You know, wearing Chinese dresses when you're not Chinese, or having dreadlocks when you're not a Rastafarian. Or white European actors playing oriental roles. Etc.

On one level of course it seems fine. The days of 'blacking up' are well and truly over. I think it is a little odd, however when it comes to actors and actresses as it seems to be part of their job to persuade us that they are someone else. Taken to its logical extreme, you would not have a black man or woman playing anything but an 'culturally appropriate' black role, which seems to me to be a backwards step. And of course, a woman playing a man would be verboten (please ignore the fact that women should only be played by young men when Shakespeare is being performed).

It also seems to go rather against the whole 'there are no fixed genders or identities' schtick. After all, if a woman can identify as a man, and I have to take her seriously, why can't a white European male identify as an Asian woman? But logic has never really been part of this conversation. And I fear it never will.

So I am feeling culturally appropriated against. My culture is being appropriated by fashionistas who have no faith. See here, here. They are using the cultural symbols and identity marker of my faith and wearing then to other ends. And please don't say that they are part of Western cultural identity, because a Bishop's mitre is not, and neither is the Sacred Heart (definitely not in a WASP culture).

Indeed our culture is not only being appropriated, but it is being mocked: what other conclusion could we come up with when a 'rainbow' cloak is worn? Let's face it, the designer is not referencing the berit with Noah.

So why can this happen for us, and not for others, and how can it be that we allow, and promote it? It would rather be like Malcolm X loaning the grease paint for 'black-up Thursday'.

This is a good question 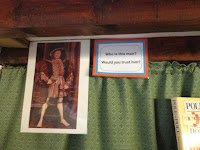 I was sorting out my laptop, moving stuff about, deleting duplicates etc. and I came across this picture.

I wish I could remember where I took it. I do remember that it was in a National Trust property, and this was in a garden building, and it was trying to make the building 'relevant' to the young!

And they came up with this!!!

Who is this man... (bed-hopping wife-killer)