The great Lenten practices are prayer, fasting and almsgiving. Of course the cynical ask “But Father, shouldn’t we be doing that anyway? Why is it different in Lent?”

Actually it is a good question (unless the reason for asking it is to get off the hook and do nothing for Lent at all). We know that we all have the obligation to say a Morning and Evening prayer - and for those of us in vows or promises, those prayers may have a special form. And we know as well that (almost) every Friday through the year we must abstain from eating meat (by the way this is not an optional extra for the keen, or religious fanatics. Nor is it something that a mere Priest can exempt you - or himself - from). And as for almsgiving, then we only have to hear the words of Our Lord in the Gospel of St Matthew to know the consequences that await us if we do not give drink to the thirsty, food to the hungry, clothes to the naked &c. So if we have to do that anyway, why is Lent different? Well, apart from us trying to mirror what happened to Christ in the desert in a small way, it points to something much deeper.

We know that cream cakes, and sherry (or fizzy drinks), and sitting around watching Casualty, are good things. But they are not good things if all you do is spend your life slumped in an armchair, with the remains of custard slices and empty sherry bottles (or fizzy drinks bottles) around you. We also need exercise, health drinks and nourishing food, to keep our bodies, and our minds in a good state, to keep us fit and active. And if we are about to do anything important, be that running a marathon, or trying to get into that little black dress again, or listening to your doctor, then we have to prepare for it. There is no magic wand to make us healthy and fit. We have to work at it, bit by bit, so that as we become fitter, or slimmer, or healthier, and so we can reach our goal. So it is with Lent. It is, if you like, our spiritual work out regime - preparing us for life. Even though we may fall into bad habits at other times of the year, Lent gives us the opportunity to refocus, and get in shape. So, although we should be doing these good things at other times of the year as well, Lent is a (not so) gentle reminder of what we should be doing and how we should be living.

Keep spiritually fit this Lent through prayer, fasting and almsgiving!

Email ThisBlogThis!Share to TwitterShare to FacebookShare to Pinterest
Labels: Back of the Bulletin, custard slices, Lent, Sherry 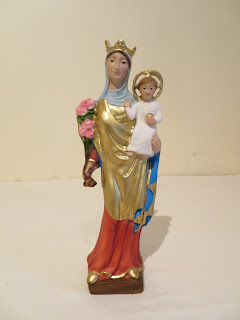 The Shrine has commissioned statues of Our Lady St Mary of Glastonbury. They are made of resin, and stand at 8 1/2 inches high (21cm).

Generally they are sold in the Shrine itself or during the Diocesan Pilgrimage, but I want to spread devotion to Our Lady of Glastonbury, and statues are a time-honoured way of encouraging prayer.

The cost is £25 (plus postage - see below). If you would like to buy one, then email me at achaplainabroad@hotmail.fr and we can arrange payment etc. 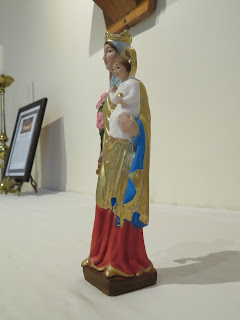 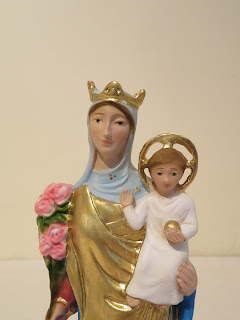 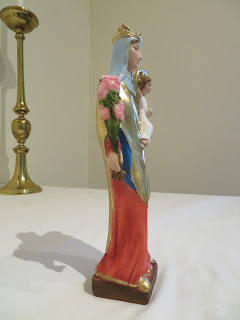 Postage is as follows: 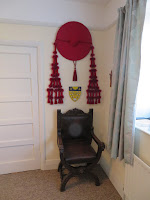 ...is this too much for my dining room? 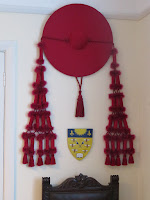 What a strange word ‘Lent’ is! In most languages this period of preparation before Easter has something to do with the word ‘forty’. In Latin it is quadragesima: in Italian it is quaresima; in Spanish cuaresima; in French carême. German is a little different with Fastenzeit - ‘the time of fasting’. Japanese is 四旬節  - but I have no idea what that means.

These words, then, either tell us something about the season (a time of fasting) or how long it lasts (forty days). Of course, in English we do not follow this practice. For us ‘Lent’ comes from Old English lencten which means Spring, or the time when the days are getting longer. We just have to be different! The forty days mirrors the forty days when Our Lord was in the desert preparing to begin His public ministry. This is why we begin Lent on the Wednesday before the first Sunday of Lent. The Latin West has never kept Sundays as fast day because the day of the Resurrection has always been held most important that fasting. But if we remove the Sundays from Lent, then we no longer have forty days. To make this up, Lent was extended before its first Sunday by adding the missing four days, thus arriving at Ash Wednesday.

We fast, because Our Saviour fasted while He was in the wilderness. Although the great Lenten practices are prayer, fasting and almsgiving - fasting has always been the most important. And we know that it has been important, because we have document after document for centuries upon centuries trying to get out of fasting! We have endless questions about what counts as a meal, and what we can eat, and how much of it, and if it includes wine or not. By the way, having to give up wine went out in the 13th century.  So you can still have a dry sherry - but not too many! It was often the case the Kings and princes (and the Queens and princesses) were exempt from fasting, but this smacks of favouritism if you ask me. I believe puffins were defined as fish for a while, so could be eaten during Lent. Hunting and other celebrations were also banned during Lent, so that the whole season was focussed on God.

Anyway… Lent is a time when we follow the example of Our Lord, and as He prepared Himself for His Father’s work, so we prepare ourselves to be His followers and faithful servants. May your Lent be spiritually fruitful, full of the love of God.

Email ThisBlogThis!Share to TwitterShare to FacebookShare to Pinterest
Labels: Back of the Bulletin, Lent, Puffin

I have been crossing out the "This is..." from the New Lectionaries that the Shrine has bought. The readers stand more of a chance of remembering if there is a nice pencil mark through it. Of course in the great tradition of mutilation of liturgical books, I should have done it in biro - I have several altar missals desecrated by scrawls and crossings out - but pencil it is.

Anyway, I am starting on Volume III. I noticed that the options for the reading for confirmation are as follows:

Now, any boy who I have taught will be able to tell you that to get the correct number of possible combinations you multiply the numbers together.

So, for the rite of confirmation we have a possible combination of

What now for Pope Francis?

A victim who was sexually abused by a Priest has said that the Pope has lied to him. The horrible story is recounted here on the Catholic Herald website. Actually it is now in the hands of the Associated Press.

There had been much confusion at Pope Francis' promotion of Bishop Juan Barros in Chile. There were demonstrations when he was installed as Bishop because of his knowledge of the sex abuse. And now, contrary to his public statements, it seems that Pope Francis knew of the situation all along.

This, of course, was made all the worse as Pope Francis claimed that he had never heard from the victims, but now it seems that he had been give a horrendously descriptive 8 page letter in 2015, by Cardinal O'Malley.

As a Priest, let me tell you that you can forget a lot of stuff, but not things like this.

I do not know what is going on here. But I do know that you cannot lie to a survivor of priestly sex abuse.

Or even, with the most generous explanation possible (and then some),  you cannot get yourself into a situation where a victim of priestly sex abuse thinks that the Pope has lied to him... and do nothing about it.

Happy feast day to you 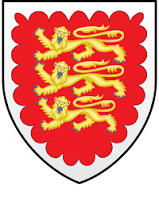