Look at this!!! "Cardinal Burke: we will make ‘formal act of correction’ if Pope doesn’t issue Amoris clarification"

I think when I was teaching in Chavagnes that I used to issue formal acts of correction.

They were usually written in red ink. When I was doing my PGCE we were told that red ink was aggressive and that some of the pupils would react badly to it, and it was setting up a confrontational attitude. Personally I think factorising x squared plus five x plus 4 incorrectly deserves and act of aggression, and I would expect them to react to it - hopefully with shame. If their reaction was 'bad' and they stuck to their incorrect result, then it would have to get confrontational.

Think what would happen if factorising went wrong! Actually it would be horrendously serious, not that technology and algorithms run the world.

So my formal acts of correction were justified. Always polite (except when the boy refused physically to listen to me) and always clear (even when they refused to accept the blatant truth of the laws of factorisation... and so lengthy explanations ensued until they finally got it). And always with a red pen.

I wonder if that is why Cardinals wear red?????? 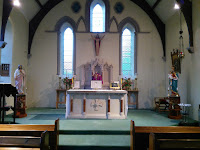 One of the many wonderful things about the Old Rite is that on All Souls day the Priest can celebrate three Masses without leaving the Altar. It gives an excellent idea of Mass as the Priest's work, and although it is nothing compared to physical labour, it is supernaturally tiring. 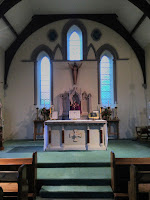 Anyway. This year I said the Masses at Bellingham, and these are pictures of the inside of the Church set up for the Masses. 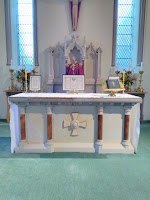