Do we still believe in Europe?

Well, what do you know? We voted to leave Europe! I think that before the vote on June 23rd the Bishops said something (which I took the precaution of not reading) but I am not convinced that there was a ‘Catholic’ answer to the question. It was simply one of those extraordinary moments when the UK was given a referendum vote over something important, and if you ask someone something, then they are going to give an answer.

Europe as a continent still exists. I can say that with some certainty as I looked it up on the internet, which we all know, never lies. But what an interesting thing it is to look at Europe through Catholic eyes. In 2007, Pope Benedict said, “It is a question of a historical, cultural, and moral identity before being a geographic, economic, or political one; an identity comprised of a set of universal values that Christianity helped forge, thus giving Christianity not only a historical but a foundational role vis-à-vis Europe.”

What then is Europe? It is history, culture and moral identity. And it is all of those things based on Christianity. Pope Benedict was quick to point out that the attempt by European politicians to ignore Christianity, when they were writing the European Charter, was both foolish and deceitful. Without Christianity, Europe is reduced to a piece of geography which you can point to on a map, or a political body which can change on the whims on the individual members, and which can be left or joined at will (for example Brexit). It is only through history, culture and moral identity that peoples and individuals can be melded into something greater than themselves.

Our principal ‘natural’ identity, the sense of who we are, comes from our family. This is why we react almost without thinking to protect those who are closest to us, even to the point of giving our life. Then comes our ‘clan’ – our extended family, our region, our football team. The largest natural unity that any of us can really identify with is our country. The further away from the intimate unit, the more strained identity is. When Europe, then, tries to have a claim on us, it is already going to be an uphill struggle. On the ‘natural’ level, Europe indeed can seem distant and different.

But this should not necessarily be the case. Pope Benedict points us to the true European identity; one that is not ‘natural’ but rather ‘supernatural’. The thing that binds Europe together is not economic success, or fear of war, or political influence, but faith… and by faith I mean Catholicism. True European culture pointed to God and was created for His glory. True European governance was through kings and princes for the good of those in their charge, but kept in check by the moral power of the Church. True European prosperity was the common good, where monasteries and convents were as valued as those who farmed and made goods. And the true European army defended these values when they were challenged or attacked. This is the history of our continent, and this history was informed by and fostered our culture, all underpinned by the moral values which come from God.

In the light of this Catholic lens, which Pope Benedict so wisely and clearly gave us, we can see that facile arguments about immigration and economics can become dangerous. The Church sent men from one part of Europe to the other. The Archbishops of Canterbury (the last being Cardinal Pole in 1558), included the Italian St Anselm, who came to us via the French Abbey of Bec. And how would the monks of Jarrow have learnt the latest chants, if St Benet Biscop had not brought back a chant master from Rome? The Cistercians advanced agriculture and farming methods throughout Europe by sharing their expertise, and when the call came to defend the Holy Places, nationality was put aside.

All of these things we can identify with, because faith transcends national boundaries. That smallest and most intimate unit, the family, my family, is repeated and grows through all my brothers and sisters in the faith, bound together not by a political will, nor an economic necessity, nor even a fear of the ‘other’, but by a common identity brought about by baptism in Christ. Europe is the privileged place where Ss Peter and Paul met their death, and in Europe that faith grew and spread, nurturing a culture and history in safety and truth brotherhood. All of this happened because it was founded, not on the sand of human desire, but rather on the supernatural presence of Almighty God in the Church which He willed into existence for His glory and our salvation.

Europe is something which has been made beautiful by her history and culture, but which can only remain beautiful by recognising God in her midst.

I'm very pleased to publicise this, it is difficult to keep your faith and so we need all the camaraderie we can get:

Are you 18-40, do you want to deepen your knowledge of the Catholic  faith, learn its devotions and meet like minded people? Young Catholic Adults are organizing a weekend at Douai Abbey in Berkshire) led by Fr. Thomas Crean O.P. You’ll be able to hear catechetical talks, learn how to sing Gregorian Chant, say the Rosary, socialize and have fun. Book soon as places are limited!

This weekend is a unique experience, which brings the Catholic faith to a new generation!

This becomes too groovy for words about 1 minute in

I've found a recording of Mfumue. This was sung at my Ordination by the choir (African) of my parish where I was on placement. The Parish is St Nicholas of Tolentino in Bristol. 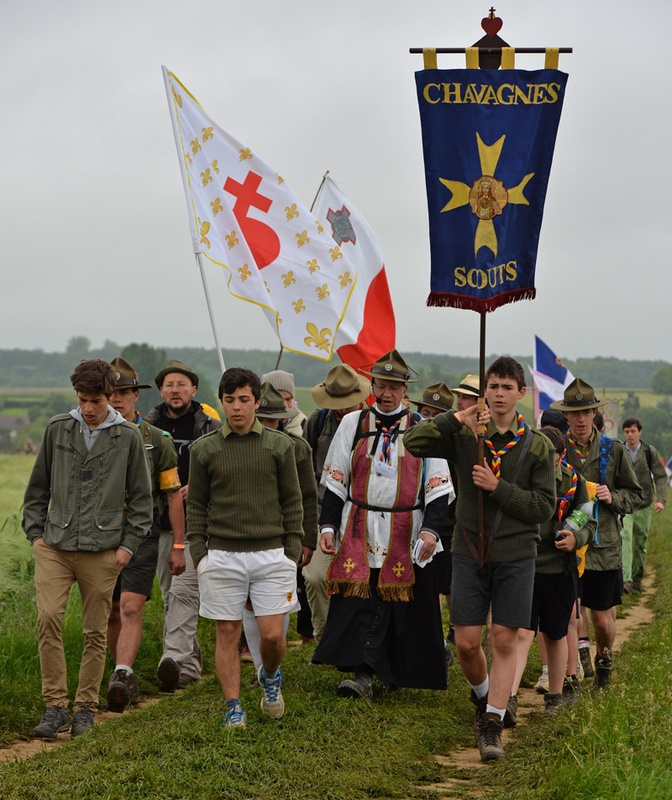 It has been in the back of my mind for ages, and you know how these things are, you sort of remember then and you sort of don't. SO I was re-arranging the Chavagnes song book for the Chartres Pilgrimage next year, and decided that the tune is so cracking that I had to do something with it. So I did... made up some Latin lyrics (with the grammatical help of Fr Redman), and it will sound very very spiffy. Just one thing... I didn't quite remember the tune correctly, and so I have completely eliminated one whole line. So if anyone on the Chartres pilgrimage hears a truncated version of Mfumue sung in Latin by a bunch of Scouts, I plead guilty now!

I am your Father

Travelling into Durham today to sit in a library and work (a revolutionary idea) there were a number of grandparents with little children.

I was most gratified when one of these little ones, looked at me, and without saying anything to his grandparents, said the two words

Were he a Catholic and called named after one of the Evangelists, then I could have replied: "Luke I am your Father." 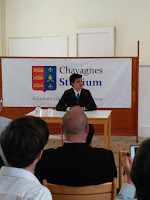 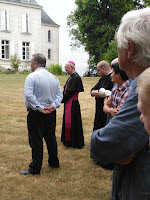 Fr Simon Henry has an excellent post about it all here, so with brotherly love, I direct you there. 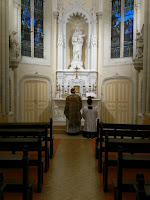 It is quite a thing to hold an English speaking symposium of such quality in France, and so all who were involved should be congratulated. I'll let you know when the proceedings are published, then you can follow it all at home.