Will I never grow up?

It is only when you have hoovered the floor three times, had four cups of coffee, looked up the classic song “Wor Nanny’s a Mazer” and tried to learn the words, that you realise that you have other more pressing things to do, which have not yet been done.

I speak of course of the Chavagnes Symposium (link here), happening this week coming and at which I am giving a paper entitled “Our Lady the New Ark of the Covenant”.

And no, it is not yet finished. But so close, so very close, just a concluding paragraph to write.

It is sad that still, even in my lengthening years, I put things off until the last minute, waiting for the rush of adrenaline when I could have had it all done ages ago. Will I never learn? Am I destined to repeat this young man’s folly over and over again? 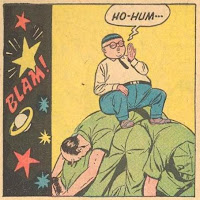 It seems so, as I am writing this blog post instead of my final remarks. Ho hum…

over this thing you can weigh pies. It was just getting dark and there was a sudden downpour (what at the end of July in the North East of England? Surely not!) when a rainbow appeared in the sky. 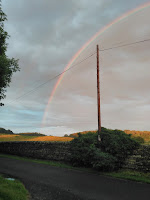 I particularly like the fact that the sky appears to be a completely different colour within the rainbow.

Here is another rainbow


Knowing the promises of rainbows, namely cold hard cash (oh and God covenant stuff) I went looking for the pot of gold at the end, but just found some dodgy, beardy man wearing green. That's no good at all. As my grandmother used to say "never trust a man in a beard" - wise words indeed! 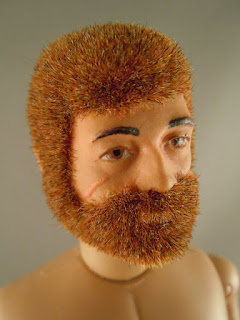 So I shall look to the sky and enjoy the sight, and not to the ground.

Do we still believe in Royalty? 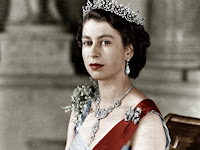 On the 11th June this year I poured a glass of something rather nice and raised a toast to Her Britannic Majesty, as she celebrated her official 90th birthday. Of course she had her being-born-birthday on April 21st, but you really can’t begrudge her another one (I myself keep a three day celebration for the feast of St Bede). No matter what, she has been a great example of steadfast service to her country – a life dedicated to the role she inherited and did not choose. 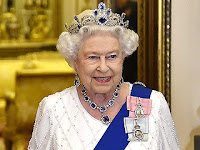 Occasionally you hear rumblings of republicanism, or criticism of Prince Charles for being too political, and you can even sometimes hear dark murmurs of Jacobite claimants to the throne, but in the United Kingdom, for the foreseeable future, Royalty seems here to stay. 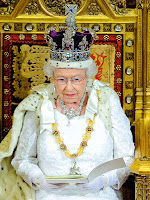 This does not, of course, mean that the Church approves of it. Simply because something exists does not mean that it is good or that it should be preserved or promoted. In fact, one of the strengths of the monarchy throughout the ages has been that even though you can get good Kings or bad Kings, it is the monarchy which stands or falls. The principle is Kingship, not this or that individual King. In this way it is rather like the Papacy. You can have good ones, and terrible ones… but this does not abolish the institution.

So what about the Church and Kingship? And here I mean monarchy in the sense of monarchs wielding political power, even to the small extent that our beloved Queen does. Well in one way, the Church does not really bother herself too much with systems of government, except, of course, when they go wrong, or are elevated to a position which damages the people put in their care. In this, it is always worthwhile re-reading Pope Leo XIII’s Rerum Novarum of 1891. It does not tell you much about political theory, but then again you would not expect it to. We have seen in recent history the dangers of atheistic Communism, and new forms of truth being proclaimed by Parliament, we have seen dictators ruling by power, and also by popular acclaim. In industry we have examples of small collectives and large multinationals, we have private companies ruled by the will and strength of an individual/founder, and organisations run by representative board members. Is one better than another, does one tend to good and another to evil? Should we promote this one and decry that?

Obviously (I hope!) the answer is “no”. Some may be better in certain situations than others, and none is essentially right, and none essentially wrong. For example, is it better to have a benign dictator ruling you or voting in a democracy which then goes on to allow the killing of innocent life. Would you prefer a hereditary, all powerful Queen who governs fairly with justice, or a series of collectives which cannot defend you or your loved ones? 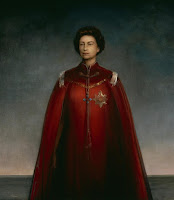 This is not some paean of praise for the British Parliamentary Democracy, simply a small reminder that the purpose of government is prescribed, and the form of that governance can change. We creatures of God are called to live in community in harmony and peace, and to do that effectively there must be organisation and structure, but as to what that is… well it changes according to individuals and times. We are not progressing in some Marxist way, from one to another – the mentality that says “in the olden days we had kings and Princes because we were not advanced or civilised enough to govern ourselves”. 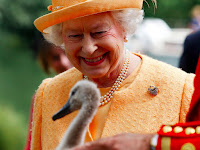 There is one thing which is essential, and it is this: all Kings, Presidents, Dictators, First-Citizens, whoever, must realise that they are under the authority of the Kingship of Christ. Any government which violates the law of God, of which the Church is the guardian and exponent, is not worthy of its high calling. In Queen Elizabeth II, we see a woman who knows her obligations under God, and on the final day she will stand before him, as a Queen. And I have no doubt that she will acknowledge His Majesty, for she is a woman of faith. 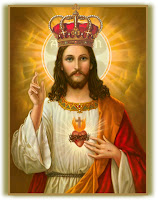 So we do believe in Royalty… for Christ is our King.

Here with are some photographs of Fr Mawdesley's first Mass in Wigratzbad. I know that it happened ages ago, but you know... I've been busy... 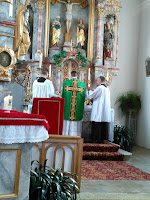 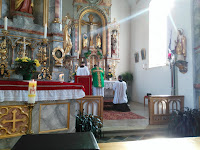 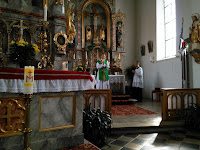 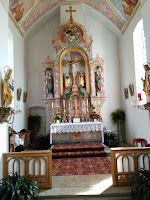 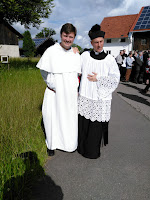 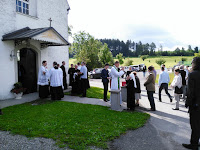 It makes me remember my own first Mass. But that's a whole different story...

Earlier this month, a confrere (the noteworthy Fr Redman) and myself went to Germany for the ordination of (now) Fr James Mawdesley. He is a member of the Fraternity of St Peter (link here) and studied in Wigratzbad. As a group they celebrate exclusively the traditional rites, and it must be said, are doing very well indeed.

It was the first time that I had attended an Old Rite ordination, and I could go on about the beauty and symbolism. I could also critique the morphing into the new rite, and what has been lost and try to suggest why the changes came in. But actually what struck me most forcefully was that this was not the ‘extraordinary’ form of Ordination at all. 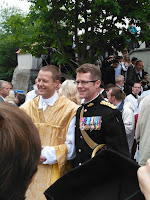 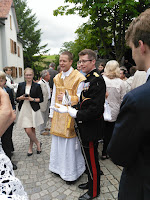 Let me clarify that. I know that it is the Extraordinary Form. Pope Benedict gave us this language. What I mean is that this is not extraordinary in the sense of being refined and restricted. Well at least it wasn’t. This is what would have happened in every Cathedral in every Diocese, until the recent revisions. And it would have been ‘performed’ well in some placed and not so great in others, but it was normal.

Rather like Mass really. We have to remember that the Old Rite (Latin, Tridentine, Extraordinary – whatever you want to call it) was normal. This was Mass. If anything (pace Pope Benedict) it is the new Mass which is extraordinary…

I have recently discovered that this blog is loved by some


Ooh Father, you haven't written anything for ages, I used to look at you blog but there is nothing on it any more. You must put things on it again

unknown by almost everyone

and held against me by others


You do realise that people read your blog and that is why you are where you are.

I must confess I did not fully understand the power of writing about dreaming about the number 30, or Freaky Dragon Boys, but apparently it drives certain people to the very edge of distraction.

I have been reliably told that we should be at the edge nowadays, and so I take up this blog again with joy and relish, so that we can all go to the edge together.

And also what's the point of having a blog if you don't blog. So blogging has been restored.