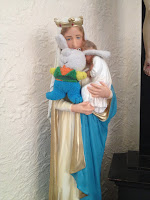 Our Lady cradles the Christ Child and the Easter Bunny. A perfect synthesis of sacred and profane.

Or she is preparing Easter lunch... you decide. 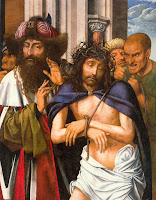 If you wish please stay and watch with the Lord until Midnight, or feel free to call in and pray at any point.

Good Friday
3:00pm Solemn Liturgy of the Passion
6:00pm Stations of the Cross

Easter Sunday
10:15am Mass of the Resurrection

On the BBC website (link here) about the American Election (so far...) there are the interesting figures of the amount of cash each of the candidates has raised.

A few caveats... it is not all of the candidates, and they get more dosh from super PACs (I do not know what they are). So it's actually more than this. Amounts in pounds sterling.

This does not include the big fundraising campaign of Jed Bush, and the others who have dropped out. Nor those elusive PACs.

Still... two hundred and fifty million quid is a large slice of moolah. I do hope there is no moth or rust about.