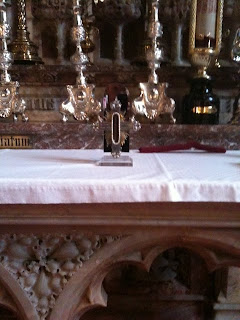 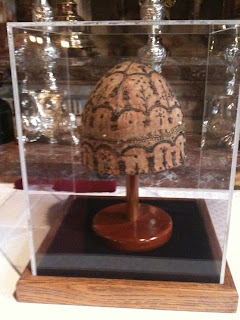 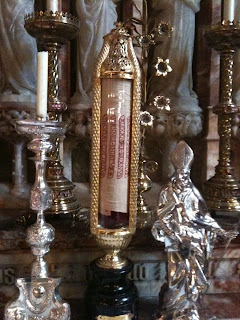 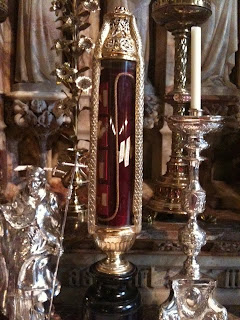 As the Priest comes to the Altar of God to offer the Holy Mass, he kisses the relics, the remains of the saints, contained therein.

As an extension of this, relics were placed on the altar and on the gradine (the liturgical 'shelf' behind the altar) for the same purpose - to remind us that we offer Holy Mass in the presence of the Hosts of Heaven and the Celestial Armies of the Holy Angels.

What mystery! The Lord truly and substantially present in the Blessed Sacrament in the presence of the Cross which bore His crumpled dead body.

On the Gospel side on the table of the altar was a cap of St Thomas Becket worked by his daughter. The hat which covered the head which was so cruelly wounded to the saints death.

On the gradine on the Epistle side was a reliquary like a pillar which contained the cloth used by five reformation martyrs while they were in the Tower of London, before they went to their death. You can see the named of four, the fifth is just hidden from view.

Lastly, yet so poignant for the Jesuits, was the pillar reliquary on the Gospel side. This contained the rope used to bind St Edmund Campion.

In the context of a wedding, a moment of such happiness, it is so fitting for us Catholics to have, there in our midst, memories of death and torture. True happiness which Edward and Mags work through their marriage, will only come to perfection in the Courts of Heaven. Pray God they will not be called to death for their faith, but if it be so, then they face it together. And they will, God willing, one day stand on the company of St Edmund, St Chad, St Thomas and all the Holy Martyrs whose remains witnessed their vows.