At last we can read

It is a great relief to the monks of the Community of Our Lady of Glastonbury (link here) that we can read in comfort. Actually we don't read any of the office, it is all sung. 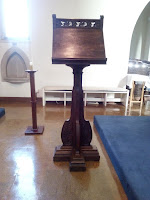 We picked this up at a local architectural salvage place, and the note on it said that it came from St John's (built by us, pilfered by Henry the VIII - noted bigamist and wife dooer-inner) in Glastonbury. 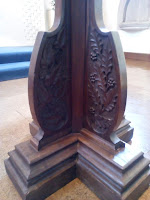 We sing matins from small hand breviaries as we have not been able to find choir ones yet. If you have some can you please let us know... 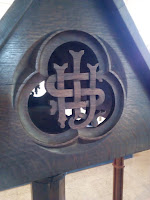 ... to Dom Anselm, clothed 24 yeras ago today the feast of St Maurus in a certain monastery in London.

Although there was an intervening 23 1/2 years, it is good to be back in the habit.

St Maurus was as a boy given into St Benedict's care and among other things, ran on water to save St Placid when he was drowning, so the Office an Mass are all 'water' themed. Around 543, Innocentius, the Bishop of Mans, sent his vicar, Adenard, to Monte Cassino to ask St Benedict to send some monks to Gaul. Maurus was dispatched. He founded the Abbey of Glanfeuil.He died on January 15th 584.

From this monastery countless monasteries in France flourished, so St Maurus is the monastic apostle to the Gauls.

The Prayers of the Community

When I was a young man I was in a monastery in London for four years. Well, less said about that the better, but one of the things that struck me was the reading of the Rule of our Holy Father, St Benedict. Just as it should be, of course, but it struck me for a number of rather strange reasons.

One was when an elderly monk pronounced ‘none’ as ‘none’ – i.e. no one, or nothing, instead of the Monastic Prayer of None (long ‘O’ rhymes with ‘bone’). So he ended up by saying that ‘None should be said early’, as if it were no one or nothing should be said early, instead of the prayers ‘None’. Honestly, we didn’t get out much, it was hilarious. I still have a smile on my face when I think of it.

So… back to reading the Rule. The weird thing was that the Rule is to be read three times in its entirety every year, and most of the older translations have three dates next to each section so you know what bit to read when. But in the monastery in London, we didn’t follow that scheme. And we cut out huge bits of the Rule, and it has only struck me now why we did that. It was because quite simply we didn’t follow it, and it would have been embarrassing to say ‘this is what St Benedict, our Holy Father, the one that we are supposed to be following, being Benedictines and all, said we should be doing… and… oh… well… we’re not.’

It was not the things about wearing knives (which we must fit to the age in which we live), nor was it about sleeping together in dormitories (now way at all nowadays… the old monasteries have more than enough problems in that direction) it was something much more fundamental. It was to do with the prayers that we sang.

It was the Office. And being a monk is all about singing Prayers..

Community of Our Lady of Glastonbury

In August 2019, Bishop Declan Lang of Clifton Diocese, signed the statutes of the Community of Our Lady of Glastonbury, a private clerical association. This is community following the Rule of Our Holy Father St Benedict, singing the Office in accordance with the Rule according to the Antiphonale Monasticum and the Breviarium Monasticum.

Our apostolate is running parishes in the Diocese of Clifton. Currently we are the parish priests of Glastonbury, Cheddar, Shepton Mallet and Wells.

Please pray for us.