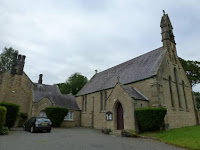 Update: From next weekend (Sunday October 2nd) Masses will be as follows

I will sort out the Latin Mass a few weeks after that once I know what the whole Sunday schedule is working. 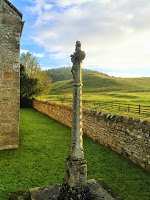 My neighbour in Bellingham is not too grand at the moment, so please pray for him.The upshot is that I am covering his Sunday Mass, so for the moment


THE LATIN MASS IS PUT ON HOLD

in Swinburne. As soon as possible I'll reschedule it... I am saying private Latin Masses, but they are a bit as-and-when. I am hoping that in a few weeks, things will settle back down, and I'll let you know what is up.

If you are in the region, then email me (address to the right) and I'll fill you in.
Posted by Fr Bede Rowe at 1:05 pm

Today is the Great North Run. It is a fantastic thing which takes over huge chunks of south Tyneside. As a boy we used to go and watch them running past... after church of course.


Those of you know know me will find it very surprising indeed to know that I once did the Great North Run. Actually it was the junior Great North Run, but as allergic to activity as I am, let's not quibble. I remember lots about it. I used to try to practice (not too much I seem to recall) by going for a run in the evening. I would listen to Aha on cassette which I played through a cheap version of a Walkman. "I've been losing you" takes me immediately back.

I cannot remember much about the run itself, but it definitely happened as I have a medal. 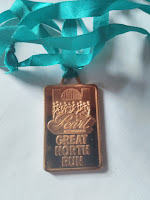 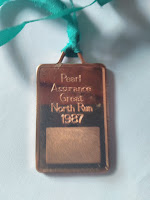 It is a strange thing, time.

A wonderful Mass, in a spectacular place. 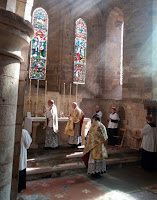 Email ThisBlogThis!Share to TwitterShare to FacebookShare to Pinterest
Labels: Brinkburn

If you're around Northumberland today, then there is a Sung High Mass at noon at Brinkburn Priory.

And if you're not around... then why are you not in Northumberland?

Time for a new religion

What follows is not real, and I don't believe it… just saying.

I'm wondering if we should revive the prophets of Ba’al.

As you know these were the chaps who Elijah so wondrously destroyed in I Kings 18. With historical hindsight we can see that the way they were presented in the Old Testament was very much from the ‘history is written by the victors’ school. In many ways we should see them as an indigenous religion which came into contact with nascent Israelite worship, and then subsequently came not into contact but rather into conflict with it. So the Israelite religion changed from being inclusive (taking the best from Ba’al worship, such as their fertility practices) to being restrictive (blaming the stranger in their midst for external pressures and defeats – ‘we were exiled because we were not strict enough to keep our exclusive faith in God’). 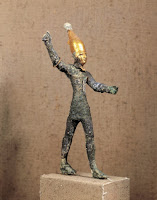 We cannot deny that Ba’al worship touched a psychological need in the people of the time. The little we know of the religion speaks of the need of the individual and the society to seek order in a disordered universe. The climatic changes that we see in the present day fit in much better with Ba'al worship, ‘appeasing’ a deity so connected with the uncertainty of weather systems. Of course, we should not speak of ‘appeasing’ the deity, but rather the response of the individual to apotropaic rituals (things that we do to avoid evil or bad results – such as throwing salt over the shoulder, or touching a lucky object). In this we can see that both the individual and society generally could benefit from ritual actions connected with a deity (in this case Ba’al) who is exclusively connected with an uncertain climate. 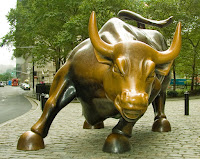 Some of the imagery of Ba’al is already current in our society. By this I do not mean the facile ‘satanic’ images, but rather the classic bull iconography. We can see examples of this in the great financial districts, notably New York. This symbol works on many different levels, from the strength and assertiveness of the individual, to the capitalistic economy which drives the world’s wealth. The individual nature of the bull, however, also shows  his limitless power to break from the oppression of man. Just as with the storms which he represents, Ba’al the bull cannot be controlled by the power of human action. It would only be through its destruction, the destruction of the bull/Ba’al, that man could assert his dominance. And with the world’s ecosystems, in the conflict between the storm clouds (Ba’al) and man, were man to win, it would necessarily bring about the annihilation of the other. The storm would be averted, the bull killed, but in the process humanity would bring about its own destruction. Ba’al and mankind live together in a harmonious symbiosis in which the human being finds his place with respect for the ecosystem, the storm, the bull-god Ba’al. 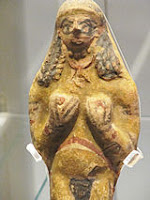 Ba’al also speaks to our present questions of self-identity and trans/gender. Although the main iconography is the bull, Ba’al is also intimately associated with his consort Asherah (Athirat) and his sister Anat. The latter, through self-harming knife rituals, tries to appease the god Mot, who represents death (the death of the individual and the world through the enslavement of the fertile Ba’al). Anat, through surgical modification finds for herself true peace. Asherah, through fertility rites and no modification, similarly serves her ‘god’. For his worshipers, then, they may be Anat (physical modification bringing about a new state of being) or Asherah (finding within themselves identity bringing forth fertility in whatever form).

We know that now we reject nothing that is good in any religion, and so it would seem to be perfectly permissible to revive a religion which existed successful for so many years. It is not manufactured as it was a real response of the human soul to God, that yearning of the human heart which asks the deep, fundamental questions. It could well be that a full presentation of Christianity is too much for people, especially with cultural differences and the negative connotations which some societies have for the faith of Christ. Surely it would be better to have any response to God, than none at all? And perhaps, dare I say it, something which has had no connection with Christianity, and so no allegations of suppression or conflict.

So perhaps a reviving of Ba’al worship is the way forward.

Then we can have a dialogue with it, and learn from it.

Wouldn’t that be nice.

Following the great success of Our Lady's vestment, (see here, here, here) I am now embarking on one for Christ the King. It will be a version of the picture at the top of this post. It comes from a priestly ordination card and I have not seen it elsewhere. I made a set of Altar Cards in a kind of an Art Deco style (I'll take a photo at some time) with the same image on, and thought that it would be spiffy indeed to have a chasuble. Also I have some edging the same as the stuff on the Marian vestment but in a kind of pink, so that would be groovy, and if I use the same material and style, then they'll both look as if they came from the same place. 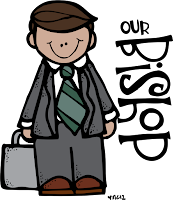 There is a story going the rounds of a journalist who wanted to crash the secret sessions [of Vatican II]. He borrowed a cassock and clerical collar, attached himself to a Bishop, explained that he was a a priest who wanted very much to get into the Council for just one day. The Bishop finally got him in as hid official chaplain. After Mass the reporter’s conscience began to get the better of him and so he finally said, “Your Excellency, I have a confession to make. I’m not actually a priest, I’m a newspaper reporter.” To which his companion replied, “Well, one confession deserves another. I’m not actually a Bishop. I’m a newspaper reporter too.”


The Septenarium of St Nicholas of Tolentino The Feast of Nicholas of Tolentino is on the tenth of September. There is a devotion to this holy saint as a patron of the Holy Souls in purgatory. During his life St Nicholas had visions of the suffering souls, and since then his prayers were asked to ease their purification.

There is a devotion to him called the Septenarium, seven days of prayer for the Holy Souls before his feast. As with the novena to the Holy Ghost at Pentecost, it ends on the feast day iself.

The Septenarium begins TODAY, and continues until the ninth (the day before the feast on the tenth).

Here is a prayer to be recited daily for the intentions of a holy soul.

O Lord, God of holiness and light
You do not allow any shadow of darkness or evil
in Your sight and so in Your mercy
You grant to those who have left this world
burdened with sin, a time of purification,
applying to them the spiritual treasures of your Holy Church.

Hear my prayer
and through the merits of Christ,
the Blessed Virgin Mary, the saints
and all Your faithful people
bring to an end this time of waiting
for our beloved dead, especially for N. (insert the name here).
In Your providence
You have chosen Saint Nicholas
as a special intercessor on behalf of the departed;
hear also his prayer for those
whom I recommend to You
through his intercession.

Through the same Christ our Lord. Amen.

Email ThisBlogThis!Share to TwitterShare to FacebookShare to Pinterest
Labels: Septenarium, Septenarium of St Nicholas of Tolentino

As well as there being no Latin Mass this Sunday (4th) I have to cancel (11th) as well, as I am covering for a neighbouring priest.

Sorry for any inconvenience...

There will be no LATIN Mass at Great Swinburne this Sunday (September 4th).