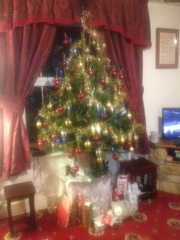 Happy Christmas tree day. I want to be very inclusive to all my not religiously minded readers.
No... Only joking! Have a blessed and wonderful feast of the birth of the Son of God, the one Saviour of mankind, the way to Heaven.
Posted by Fr Bede Rowe at 6:09 pm 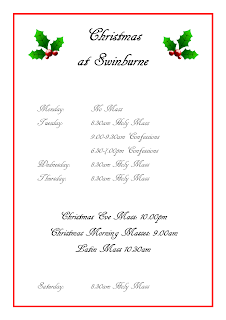 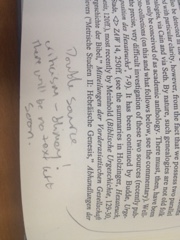 I hate annotation in library books but this one is fun.
It comes from H Gunkel's commentary on Genesis.
If you can't make it out it says "Double Source criticism - blimey! There will be no text left soon"
And my dear chap or chapess that is my considered position also.
Blimey!
Posted by Fr Bede Rowe at 2:02 pm

The Gifts and Calling of God are Irrevocable

The Vatican has issued a document on Jewish/Catholic dialogue called "The Gifts and Calling of God are Irrevocable". Here.

I will have to make a detailed study of this in the months ahead as it will be an essential part of my thesis.

I have one starting reflection...

in Latin, the section on the Jews in Nostra Aetate has 421 words.
My computer says that this one has over 10 200.

The Mass was a triumph! We had a dozen people there, and to be honest it had not been advertised.

I know that Fr Brown (here) said Mass in the upper chapel, but the Norman chapel is still up for grabs... so was this the first Tridentine Mass there? Only you know dear readers. Ask you friends and foes, ask the spies. (The spies know everything...)

But it was wonderful tonight. Thank you to the chaplain.

The first of many, God willing.

The First since the Reformation?

I wonder if the Mass I celebrate tonight at 6pm in honour of the Immaculate Concpetion of the Blessed Virgin Mary in the Normal Chapel of University College Durham (Castle) is the first of its type since the (soi-disant) Reformation?

I know that there have been other Catholic Masses said here, but I suspect only since Our Lady forcibly closed the II Vatican Council today, 50 years ago. I cannot imaging that either side would have welcomed some Catholic Priest wandering along and offering Mass pre-last Council. And since then, while I know that OF Mass has been offered, I wonder if the Old Rite has been said her, or if this is the first.

If anyone knows, then let me know: achaplainabroad@hotmail.fr

Thanks to the kindness of my College, I will be saying a Low Mass on the Feast of the Immaculate Conception in the Norman Chapel of University College, commonly known as Castle.

Mass will begin at 6.00pm. You are most welcome. 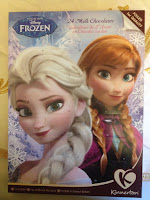 The jury and I are pleased to announce that this year's Advent Calendar award goes to this one, from the film Frozen. I think it is a film. I know it has a song attached to it because I heard it everywhere I went for what seems like forever.

Who could forget such Advent Calendars of yesteryear? The wonderful 2014 "Starwars" edition - Hmmm... the chocolates are tasty in this one.

And also Starwars in 2012 - I must like Starwars... You are an Evangelist, Luke.

Having been kicked off by Smarties in 2011 - Apparently only they have the answer.

So I bid you "Happy Advent!"

Tradition is silent as to what happened to the 2013 Calendar. We can only suppose that later redactors removed reference to it for some reason. This would seem logical as there is an obvious continuation of Calendar references which were important to the author. That the 2014 calendar post is silent about any reference to the preceding year and there is no mention of the intervening gap, seems at odds with the authors plain statements in the work, where other such lacunae are observed. Further this seems illogical as the practice of mentioning the calendars was a reasonably recent innovation, the author could easily have remarked on the gap and no offence would have been caused. With such a recent innovation, the readers of the blog would not necessarily have expected or been affected by a year in which the Calendar was either not bought, or not mentioned. Nor should we suppose that the missing calendar reference is as a result of 'self-editing' as the subject of the posts is lighthearted: they neither attack nor reprimand. When other posts are viewed alongside the calendar posts, we could easily see better candidates for removal.

It would seem then that the most likely possibility is that a later redactor of the blog removed the 2013 post about Advent Calendars for an unspecified reason. We can make a hypothesis that that year the author bought a religious Advent Calendar which was at odds with the other Calendrical posts. Rather than creating a post to replace the religious 2013 original, a difficult proposition concerning the particular style and syntax of the author, the redactor simply removed the offending post to keep the overarching mood and type of the original posts.

This may also be the reason for the absence of posting in December 2013 as a whole. In order to disguise the Advent Calendar post removal, the redactor removed the whole of the section.

The traces of this action can only be seen when identifying the authors commitment to recording the Advent Calendar purchases from year to year, be they sacred or secular (for surely in this case the presence of the Calendar takes priority over its form or type) and remarking on the striking omission of 2013.

We can only say that this 2013 post must have infuriated the redactor to such an extent that he was willing to mutilate the very texts of that year's blog.

If this was because of the blog's fundamental religious nature, then we must conjecture that this redactor was radically critical of the religion as espoused by the blog: honouring tradition, a deep and profound love of scripture; a sense of humour in the essential human condition viz a viz the figure of God and/or organised religion.

Or else he was a Bishop.