In 1829 or so, it was no longer illegal to be a Catholic in the UK. This was a great emancipation and for the first time, officially you could be fully Catholic and fully British. Of course you can't if you're a member of the Royal Family, but that is a completely other story.

Although we know, and knew, that our Government would pass laws which were discriminatory, stupid, or downright evil, this did not touch the ability of the Catholic to identify with their Country, or even the Country to fully embrace her people.

It is astounding, then, to see Google define what I am. I am British, and I am Catholic. In its advert on television Google is asked what "Britishness is". See here for the link. It is the "state or quality of being British" apparently.

Google then shows me what this means... Sitting on a deckchair... Watching Mo Farrah win at the Olympics...Ice cream vans... rugby teams... beach holidays... two Scotsmen in Kilts getting married...

Hang on a minute ... Two Scotsmen getting married ??? (See link at 44 seconds in). Does that mean that this is Britishness? Does Britishness mean accepting Gay Marriage? If I am Catholic, then, can I be British, in the fullest Google sense?

It is stupid of course. Google does not define who I am. But this advert is being broadcast over and over again, subconsciously entering into minds of people up and down the land.

This isn't Britishness, this is nonsense. Worrying nonsense. 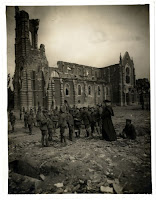 As the world crumbles, and the edifices of Church seem to be destroyed, the faith remains in its midst.

The world may declare truth as falsehood and lies as truth, but THE truth will never be vanquished.

Although most right minded people don't want to think about it, I suppose we should be starting to pray with fervour for this upcoming Synod.

We know it is going to be a down and dirty fight. And we know that the devil and his legions will be there spreading confusion and lies, so we need to marshal our forces, We will not be there in person, but I'm sure we will be ably represented by those going on our behalf. I'm sure that they will stand by the plain meaning of the words of Christ, and not collaborate with mealy mouthed sentiments which will rip apart society, the family and ultimately the Church.

So we have our prayers to offer, and I suppose we should start there. We could add an intention to a morning offering or a night prayer. Lots of people will be doing this already. It is a reminder to myself as much as anyone else.

I am going to beg the intersession of St John Paul the Great. He had it right on the family. And I wouldn't mess with a Polish saint.

Having an Art Deco day 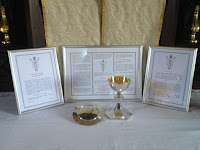 I have always loved the clear lines and shapes of the Art Deco movement. It may be something to do with watching a lot of Agatha Christie's Poirot as a boy, which in the TV version in the UK has the most sumptuous Art Deco sets.

I eventually got round to making some altar cards in the style.

You can easily produce altar cards nowadays. You just have to use a computer publishing program, I use Publisher, and really the only difficult thing is to type in the texts and the put them as you want them. The standards of modern printers are excellent. The side cards I do are A4, and the central one I take to a colour printer shop to be blown up to A3. A colour photocopy is a couple of pounds - or take a USB and get them to print it from that. Then you just need to get them framed.

For about £80 (depending on your frames) you have a unique set of altar cards. You can also do cards prayers at the foot of the altar. All you need to do with them is laminate them.

The Chalice and Paten in the picture are my favourites. I bought them on eBay!

Go on Fathers, make yourselves some altar cards! 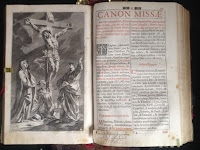 Just in case you were a little confused by the suggestions in the previous post, then this is a good example of how a little note can be added to a Missal. 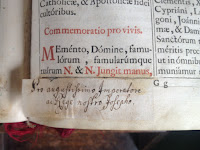 The Altar Missal is 18th century, and at some point an addition has has to be made to pray for the Emperor, Joseph. And so it was written ever so carefully and then delicately glued into the Missal. 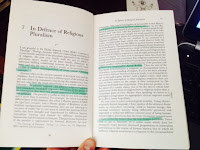 Please do not be put off by the title of the chapter in this book "The Defence of Religious Pluralism", that is not the defilement of which I speak, though some would argue that religious pluralism is of itself a defilement of Catholicism... but I digress.

I mean the defilement of the book! Some blighter has been through this book, and it is a LIBRARY book, and highlighted sections in green. It is not their possession and yet they have felt that they could simply go through it and deface it, defile it, besmirch it.

And they underlined rubbish bits, thus destroying a plain reading for anyone else (me included) who wants to read it. 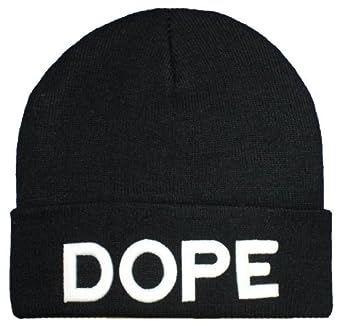 We should hunt them down and make them wear an 'I write in library books' hat. And not in cool giving-it-to-the-establishment way.

So I must ask myself how I am going to insert the old offertory prayers into the Missal, link here. Cardinal Sarah is urging this new situation. As well as the old confiteor.  And if we have learnt anything at all from the liturgical trailblazers of the 1950s, we should not wait for 'official' approval, but put it all in the Missals now.

Of course we have all seen the corrected Missals of the 1960, huge black lines scarring the pages as crosses and words and whole sections were excised. We can't do that.

But we do have wonderful computers nowadays, so we could just print the relevant sections on thin paper and then place them in our new Missals in the relevant places.

That seems like a good idea, and does not involves green markers or the defilement of books.

I have confidence in Malta 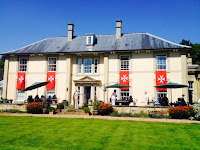 The Order of Malta, link here, held a tea party in Northumberland a few days ago, at the House in Swinburne. A great time was had by all, many thanks to the Order and the wonderful people who provided the gallons of tea and egg sandwiches.

I couldn't help comparing the bedecked house with another house in a certain musical when a Captain and an ex-nun return from honeymoon! 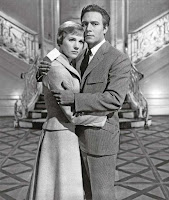 You know what I mean!

The honour of sheep

On the Chartres Pilghrimage, having just sung about seeing bears and about to launch into the kind of things that one finds in the Quartermaster's store, I turned round to see Bishop Athanasius Schneider. As we all know he is the Auxiliary Bishop of Kazakhstan, but more than that he is a great defender of Catholicism and the terrible corruptions that have taken place in various places in recent years.

All of this is wonderful, of course, but when I say that I saw him, what I mean is that he was walking next to me on the pilgrimage, with the Chavagnes boys.

We talked for, it must have been half an hour. And I have to say that I felt such privilege. You can imagine the conversation and I have no intention of rehearsing it here...

...but to be on this pilgrimage, with my boys around me, all of us tired and smelling terrible, but singing and praying. And then to have this apostle of Christ in our midst, walking with us a humble pilgrim himself. And teaching us and giving encouragement.

It was an honour. 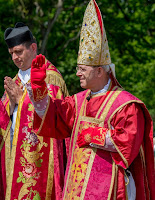 How right that is, on so many different levels! 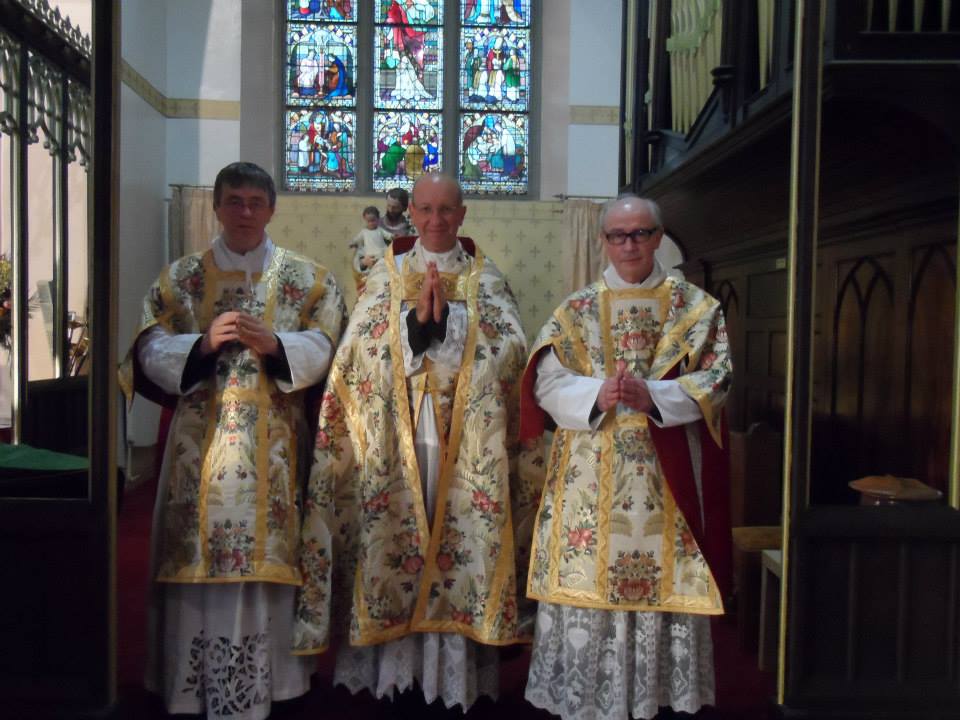 Over at Gateshead Revisited (here) you can see an account of the High Mass for Corpus Christi. 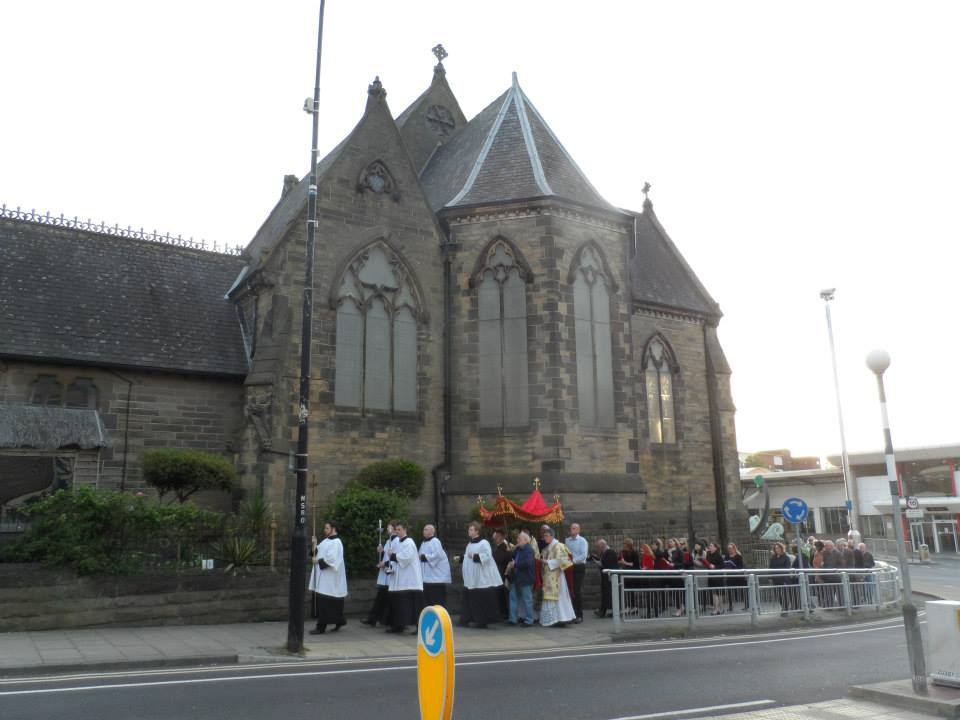 It was quite a thing to process around the Church, on the public streets in Gateshead. A little bell fell off the canopy, but that was the only problem.

Chavagnes Scouts on the Chartres Pilgrimage 2015

The Catholic Herald reports (here) that the new Papal Encyclical will be entitled "Laudato Sii". I think it is the first time an encyclical has had a title, as opposed to the first words, and I assume that it is going to be translated into Latin.

Anyway, a fine title from a fine canticle by St Francis. I hope that there is a sustained meditation on all of St Francis' words. As I recall it ends...

Be praised, my Lord, through our sister Bodily Death,
from whose embrace no living person can escape.
Woe to those who die in mortal sin!
Happy those she finds doing Your most holy will.
The second death can do no harm to them.


Especially if the Synod tries to pervert Christ's teachings...

What a difference a week makes 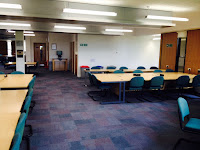 When  I was last in the library in Durham, before the Chartres Pilgrimage, I could not get a seat. It was all full of students beavering away at their studies. Actually most of them were beavering away at Facebook from what I could see.

Now it is very different. It is like the Marie Celeste! There is no one here. I asked the nice lady on the returning books desk and she said it was always like this when the exams are over.

So I can sit in splendid isolation and work in peace... 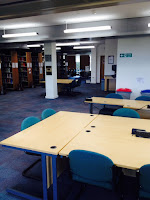 ... actually it is all a bit quiet. Perhaps when I've updated my blog I'll just have a little look at Facebook...