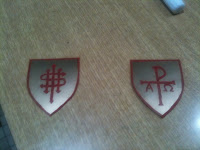 An essential element of Judas' candles are shields. They look good of course, but they also provide the function of covering up the join between real candle and Judas candle.

I showed some of the shields in St Joseph's Nympsfield here. But I can't paint that well, so these are the one's I've done. 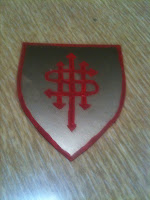 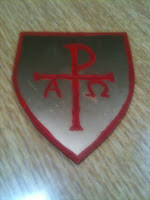 Not fantastic very close up, but from a yard or so they will look fine.

So I have done these two (on the back of a cornflakes packet), and have to decide whether to do two more diferent ones or two more of the same.

They are going to look excellent.
Posted by Fr Bede Rowe at 8:44 pm 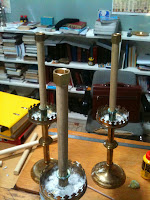 Who can resist making Judas candles! 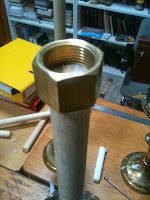 There are currently drying. The nice lady in the Brico-Pro no longer bats an eyelid as I go in and buy a two metre length of dowling and four brass screw things. 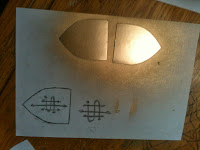 They are called Judas candles as they are false. they are there either to make sure that the candle is always the same height, or to give added to height without the additional amount of candle.  I hope they will look the business.
Posted by Fr Bede Rowe at 8:57 pm

Avid readers will have noticed a slight sock problem in Chavagnes International College. You can see such an example here. They disappear with frightening frequency and and bizarrely are the only things left when the boys seemingly spontaneously combust.

Thankfully we have a tree in the garden which seems to grow socks.

Hopefully there is mysterious bush which performs a similar function for boys. 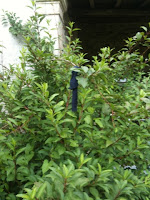 It seems that the problem has been solved 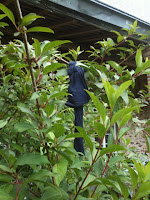 400 Years Behind the Times 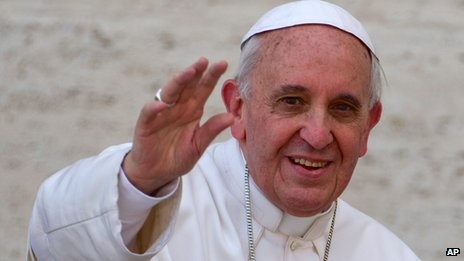 We have to try to understand Pope Francis' latest interview in terms of his cultural and social context. He asked us to do that to others we must do the same to him.

The problem is that we in the West, particularily western Europe, underwent the ravages of protestantism some 400 years ago. We were bewildered by it. It seemed so plausible. It seemed not to ask for much and the rewards it offered seemed to be so great... and what is more, it seemed so very, very pastoral.

Those of us who live, or grew up, in protestant countries know this very well. We see it every day. We breath its consequences.

We have to understand that the current Pope has lived his life in South America, almost blissfully unaware of protestantism. In recent years protentantism has started to make great inroads in that area of the world, and quite rightly the Catholic Church there is terribly worried about it. But we know, because we have been through it, that you cannot bend to cultural relativism. You cannot put the sticking plaster of "pastoral concern" over a stinking sore.

We know this. South America does not.

In my Old Testament studies one of the most important things was sitz im leben: the cultural background from which one came and from which one speaks. Pope Benedict knew and saw the dangers of pandering to the voices of "reconciliation" (falsely called) because he had lived through it. Pope Francis comes from a background being challenged by it for the first time. 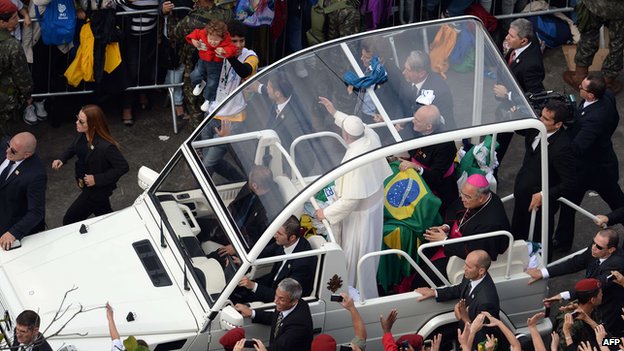 It will be different if he actually says anything which is not simply his own opinion as the Bishop of Rome. Until then, let us critique and explain. Let us be pastoral about the whole thing and not be dogmatic in judging the individual... even though he may well be responding to a problem 400 years after it first ravaged the world, and his response has proven to be incorrect.

That, after all, is what the Pope has asked us to do.
Posted by Fr Bede Rowe at 8:12 pm 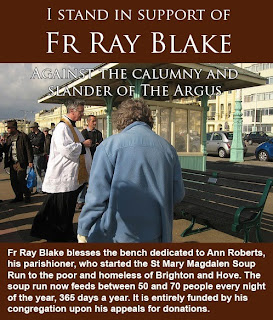 Fr Blake at Fr Ray Blakes Blog, has been traduced recently. You can see it all on his blog.

Even in the new age of electronic media there have to be standards. You cannot go around twisting a man's words and just expect to get away with it.

No, wait, you can. By the time something has been uttered and entered into the 'no smoke without fire' part of the world's consciousness, then it is all too late. 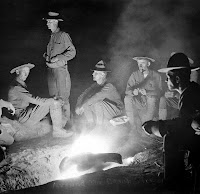 I do not know any priest, least of all Fr Blake, who would have said such uncharitable things about the poor. Our faith is too littered with cautionary tales for that.

St Edward the confessor was riding to a ceremony at a chapel dedicated to St John the Evangelist in Essex when a beggar asked for alms. Edward had no money with him so he took off his ring and handed it to the poor man instead.

A few years later two English pilgrims were travelling through the Holy Land and became stranded. They were helped by an old man who told them he was St John the Evangelist.He was carrying the ring Edward had given to the beggar some years previously. He asked the pilgrims to return it to the king telling him that in six months he would meet St John in heaven.

We do not know who may be disguised as the poor, and we act accordingly.

"Uttering all kinds of calumny on account of my name" springs to mind. All strength and prayers to Fr Blake.

The poor we will have always with us... the Lord was silent about the continuation of journalists.
Posted by Fr Bede Rowe at 7:37 am 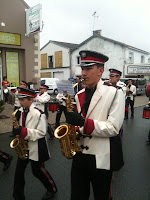 On Saturday, popping down to buy some chocolate (for the boys you understand) I was comfronted by this rather strange sight. It is not everyday that you come across a brass band in the middle of a small town in the Vendee. 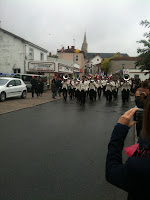 It turned out that it was Chavagnes turn to hold the Happy Fireman day celebrations. 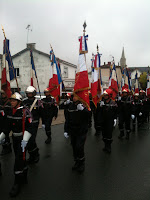 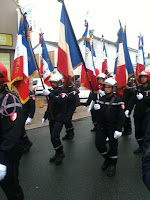 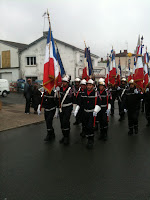 Of course it was not officially called Happy Fireman Day - but I think it should be. But how wonderful it is that these guilds (for want of a better word) are celebrated by society and take pride in their identity. 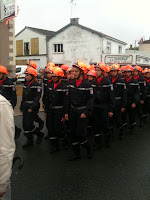 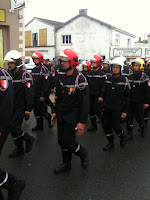 At the renaissance fair a boy met a dog 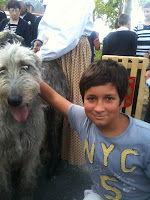 And a Priest met a hat 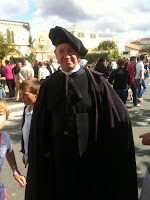 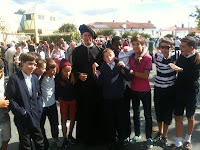 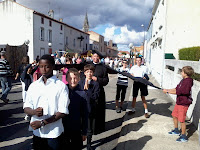 I saw this at Te igitur, and although we speak of these things in a abstract way, how much more powerful is it when it comes from the mouth of the person who would have been killed.

When you see a sign "Enfant Perdu" - lost children (OK singular in French but plural in English - everyone's a critic) - how could anyone resist playing on the double meaning and use it in a religious sense... 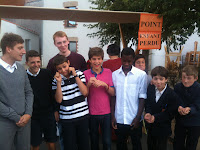 Our lot of course are always up for playing to the camera and had no qualms about pretendnig to weep in public!
Posted by Fr Bede Rowe at 2:30 pm

At the renaissance fair there was a wonderful game where a boy (or a man in some cases - I'm afraid that I did not see any ladies trying it, which is just as well or else I would have had to avert my eyes!) tried to get to the top of a pole and retrieve a little bag. If he managed it then it that he had won a prize. Originally it was greased with fat - thus 'climbing the greasy pole'.

Like many things in life it seemed so simple, just a little pole, and our boys are quite agile - especially when it comes to escaping from conduct detention.

So when they saw the pole, they thought that this was going to be a walk in the park. Well it was a walk in the park at a euro a throw, but, hey when you have a chaplain abroad with money to burn in his pocket, then life is your lobster. Or something.

So groats dutifully handed over the first of the monkey boys tried, and I have to say that he was our favourite. Well he tried manfully (for an eleven year old) but failed. I then had to go and find Mr Tyldesley, who had become mysteriously lost near the damsels in distress! 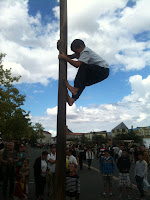 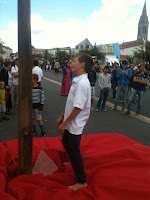 And in the intervening moments a new boy to the school had scooted up the tree and won a prize!

I had seen boy after boy fail, grown men weep, sadness disappointment and dispair in the eyes of the contestants.

What prize of glittering gold could there be for the vanquisher of such a formidable foe? What gain beyond compare?

It was a biro and a lolly pop.


But forever those lines from the scriptures "Jump! Monkey boy, jump!" will mean a little more to me, and my life has been changed... in a renaissance way.
Posted by Fr Bede Rowe at 7:36 am

New Term begins in the Renaissance 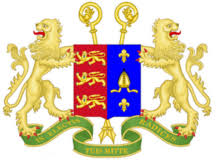 And so we are back, with some new faces and some old ones.

It is good to catch up with the boys, to see what they have been doing over the break (which included anything from walking a couple of thousand kilometres on the Camino to 'nothing - on the computer'!) and even better to be in the thick of things again.

Sunday saw a Festival at a local town called L'Herbergement. This being the Vendee, it was not the beer festival or the likes, but rather a Renaissance Festival (link Here). The whole town was decked out in Renaissance costume (or approximation) and games and stalls and the like. The food looked wonderful - we did not stay, and the dancing looked turgid - we did not join in.

But we did get boys to try to climb up a pole in imitation of monkeys and that can only be a good thing.
Posted by Fr Bede Rowe at 10:50 am