a one socked boy saying the Angelus.

It is quite normal for boys to appear at breakfast in a state of undress - nothing too bad, just without shoes or socks or ties.

They have to get up in the morning and get downstairs before I say the Angelus and bless breakfast. If not... well, let's not go there. So they will come down as quickly as possible because they are rather addicted to their beds, and, as the Masters on wake up tell me, it's a terrible job getting them out of their slumbers. 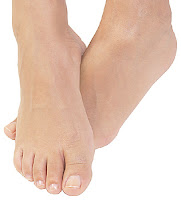 So seeing a boy with no socks on in the morning is quite normal. Indeed I remember the last time I challenged one of them:
"Where are your socks"
"They are in my pocket" - delivered in a tone of "where did you think they'd be?!"

So this morning's breakfast greeted with the sight of a sockless boy. He had arrived a little early for breakfast with socks in hand (after all, you might get away with no socks, but they'd notice if you weren't there) and so started to put them on.

For some reason (still quite beyond me) he did this while standing up. Quicker and easier to sit down first, I know, but this is the mind of a boy... He got one on before the solemn tones announced the Angelic Salutation.

He stood, stock still, and said the Angelus. One sock on, one sock off.

Angelus over, food blessed, the other sock found its place on the naked foot.

Our boys know that no matter what you're doing (all things being equal) when prayers come, activity stops. Worship of Almighty God takes priority.

Even over socks.
Posted by Fr Bede Rowe at 2:43 pm

Who'd have thought it!

It seems that my plea and faux prediction has come true!

Here I posted about the fact that an open dissenter to the explicit authority of the Church was being invited to speak at a Diocesan Conference in the Cathedra of a Catholic Bishop and thus successor of the Apostles.  (Prof Tina Beattie, Clifton Diocese and Bp Declan Lang in that order).

Well it seems that the talk has been cancelled - I can genuinely say I'm gobsmacked. The letter is here.

Hats off to Bp Lang, a defender of orthodoxy and lion of the faith. I am sure that there would not have been many Bishops who would have stuck their necks on the line and done something so decisive.

a boy with a shovel digging up worms?

I remember that at the beginning of the last year there was a certain time of flux;

So is should not have come as a surprise when I found myself going round the school trying to find a new boy who, in finding that he wasn't in a certain class, decided that it was time to go digging for worms for fishing. With permission of course!!!

So the begnning of term found me searching through the school uttering the immortal words:

"Has anyone seen a boy with a shovel digging up worms?"

Welcome to the school.
Posted by Fr Bede Rowe at 10:48 am

After many question about the presence of a certain Tina Beattie at Clifton Diocese's Conferences on the latest meaning and interpretation of the Second Vatican Council (1962-1965), the event seems to have been cancelled. See here for the (rather hidden) announcement.

Of course as a Priest of the Diocese I do not know the reasons behind this. Or indeed that it had happened. A friend stumbled upon the news.

Still we can hope that perthaps some public scandal has been avoided.
Posted by Fr Bede Rowe at 2:44 pm New term (almost), new boys, a new teacher, new candles (spent an hour and a half spiking them), new prayer books (despite the 'anger' of God in place of the 'angel' of God - I have Old Testament precedence), new course (A level RE), new cope about to be ordered (we're going to have sung vespers and I want cantors in copes)...